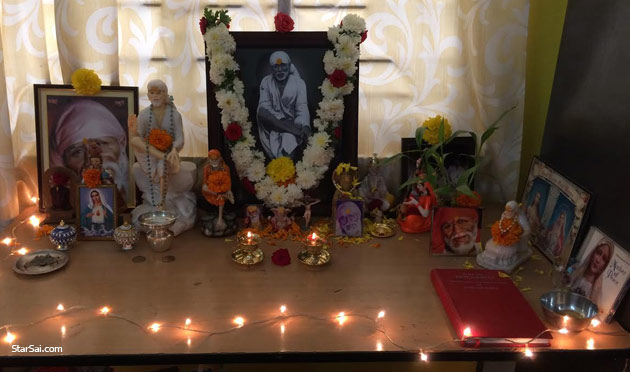 Firstly, a humble request to all my Sai children. Many of you are asking my Mobile number but honestly, I don’t even have time to reply mails. Even to those whom I gave number, I requested them first to message me and then call and not to feel bad if I don’t pick the call. This is because I have few other responsibilities. Additionally, I wanted to care for all of you. If I focus on one devotee, I may not be able to think about others. So I try to spread the free time I get for everyone equaly. All of you are important for me and my prayers are always with you. Even if I did not reply, you can count my prayers for you has already reached Sai.

In May 2015, I had a dream as if many Grey Squirrels are really pained and hence they hold their palm together to worship Lord Ganesha. Later, I discovered, some people in the U.K are killing these poor grey squirrels as they consider them as responsible for spreading diseases to the native Red squirrels.

After few days, I got a mail from a devotee who was doing her higher studies in the U.K – She likes to call herself as Sai Genie. This is what she wrote..

Jai sai ram from Cambridge, UK.. I am a sikh girl from Lucknow and a social worker by God’s grace ..I am writing to you to send you a picture of one my squirrel friends standing in prayer haha 🙂 this ones name is Burger because its so fat! Just today I was thinking when I leave and go back to India in September I must leave a letter for the next person who occupies my room to continue feeding these beautiful animals.

Several month later, another Sai Sister of mine Vahida wrote as below..

I lost my sweetest friend Paddu in july 14th 2016, later i lost my love my cute Dathu(male Squirrel) on 8th august 2016. Venkat truly i got one thing and I strongly believe through Sai baba talk to me through StarSai.Do you know how……………?
on 8th aug 2016 you have posted one article

In that article you have posted squirrel pic.Venkat i am so thankful to you.

Dathu came to our home in the month of february 2016, he was cute little child, his eyes were also not open and he lost one back right leg, some animal might have ate his leg. My duty was to feed milk to him, take care well , i put him in small basket with cotton cloths, I felt he is my own kid, for 3 to 4 months I feed milk to him for every 2 hours, even during night times also I set alarm for him to give milk. 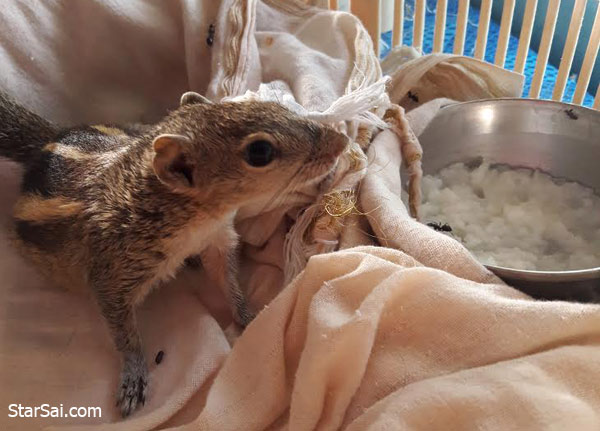 When he is growing I started to give fruits like apple sapota and so on. Later in the month of april 2016 another baby girl Squirrel came to my home. So my responsibility incresed i started to feed both Dathu and Kittu(girl), give food make them to sleep comfortably, but Dathu was getting Fits 3 to 4 times a day. I searched on net for treatment but by baba grace i got home made treatment. So i treated him as per my capability.

But on 8th august my Dathu my cute baby papa left me. I cried alot as his own mother. My parents, friends and neighbors tried a lot to make me normal. But later I remembered you. So saw StarSai on my mobile. First thing, I saw a Squirrel bowing.

Venkat just imagine how I would feel?

My eyes were not able to see anything because of tears. 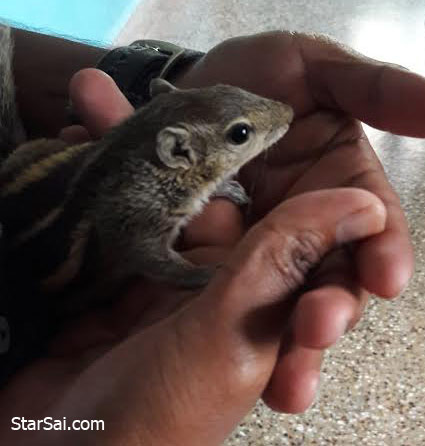 I got that my love my sai baba following me he make each and every movement to make me strong. Venkat, I learnt so many things through my Dathu……….he shown so many things how to keep attitude, I was very caring about Dathu whenever he runs faster or do anything harm to himself I felt very sad, I thought I am also just a small squirrel to my baba almost times i also behaving like a stupid. So how many times my baba may feel about me so I thought that I have to change my attitude which makes my Sai baba happy. so Im changing my stupid habits one by one.

I can say in this universe every action, every animal, every thing which all are created by God are created for some of purpose nothing is useless.

Each and everything in this universe performs its own duty or give a good message to this world.

This is just a small incident. On various occasions, I used to hear some devotees tell me that they had felt that I am writing about their own life when they read my articles.

Have you read this article and video I made relating Sai’s love with Jasmine flowers?

After that I got this mail from Akila!

Dear Venkat ,
Jai sai Ram
Had to share this . I live in Dubai and went to see Baba today and Baba gave a string of Jasmine.
See the magic of your post .. Baba’s love is reaching all his children. Share your thoughts totally there is no one like our Sai .
Loads of wishes , keep this love flowing

I used to get several mails like this from devotees as soon as I write some article describing how painful is my stupid life. And what made me write this article. It’s because of the article I wrote yesturday about the dream I had of Saibaba and Mother Mary.

Sai, Can you make me so pure that you will be surprised?

Looking at that, my Sai Sister Roop Darshini sent me below mail…

I got goose bumps after seeing baba and mother Mary picture your article. Its with Baba’s guidance I started praying Mother Mary and reciting the rosary. I was praying for my mother’s and husband’s health issues and in between a novena of 54 days and Baba and Momma Mary ensured me in most beautiful way .

She was also was kind enough to send photo of her pooja place!

These kind of experiences is worth sharing because one of Sai’s prominent desire was to see people respecting and worship Gods and Goddess of other religion. Sai basically worked for communal harmony. During British era, they tried to split us using Hindu-Muslim rivalry. The fact that Ram Navami and the Urs festival was celebrated by both Hindu and Muslims in harmony sometime back in 1910 is a huge achievement. All saints works for such unity in diversity.

I was going through some issues the past 2-3 month. I feel much better now. But suddenly I get depressed and ask Saibaba “Why did this happen Sai?”

Sai! Please come in dream tonight and guide me. I am sorry if that’s too much to ask.