I wanted to make a video based on an ad film I saw. It was so inspiring that I wanted to record a script to help people come out of relationship issues. Now a days, I am not making videos as I get too tired.

Once again, I had a very peculiar dream. It was as if someone is traveling in a bus and I am tracking them. Then, I see a very very long Saree being laid in the mud path that leads to a holy place where river Couvery banks are found. I go near the banks of Couvery but I had some ill feelings. Meaning, I am not so pure. But Saibaba does allow me to dip inside the river and come out of it.

What do I understood from this dream? I feel Sai is keeping a check on the way my mind works. He is trying to tell me that “Being Pure” and “Learning to see a women” in a very clean perspective matters a lot to get his blessings. This applies both for Men and Women.

In the second dream, I see myself traveling in a car at night. You know, the driver has kept the car so clean. Not even a single spot of dust. He stops the car and gives his music system to someone else and starts it again.

I do clean my Car but I am lazy about cleaning my Car, room or basically keeping things clean. Sai tells me about even such small issues in dream. I have no rights to tell him to first give me dreams related to my life. Secondly, I think he means to say that I am too much influenced by listening to songs while driving which can be avoided. So I shall keep a check on it.

How to tell someone if you saw them in dream?

I won’t even tell the dreams I had related to my parents and Sister now a days as they worry a lot that I always live in dreams. I keep everything within myself but I will act according to Sai’s instructions. Once when my Father fell down feeling dizzy at night and he never reacted though my Ma was screaming. Sai came in my dream and woke me up just moments before. I ran to him, made him have sugar and poured pot full of water over him. He woke up as it was too cold. he he…Now tell me why shouldn’t I trust dreams?

So how do I tell about dreams when someone else in office or other environment is involved? Its not easy and only if they are my close friends, they will understand me. Sometime back, I had a dream about a girl at work and Sai asked me to tell her to recite a mantra so that she will be blessed with a child. At times, I feel that I must have not told this to her.

Some of the guys at work, I can understand, they really see me as a good friend. But when it comes to any girl, I don’t think so. I have tested it myself in the past few days. Only I go and speak to them or tease them. They are busy with their work. I even think why should I bother them and wish to be silent. I am used to making fun of everyone and hence simply trying to be myself.

There are “Friends and there are “People who speak to you just because you are around”. That makes all the difference. Anyway..lets come back to dreams!

Unless someone is very close to you, please don’t tell them your dreams related to them. They might misunderstand.

Day before yesterday night, I had a dream.

I woke up and thought what to do. I basically get such shocking dreams related to people I come across in day to day life. I used to wonder if I should tell this to them or not because dreams are just dreams. I decided to message my friend to come by his Car and if he’s coming by Bike, he must drive carefully.

He agreed to it.

Now the question is why did I see such dreams? Saibaba is not saying that such accident is going to happen. You know what he’s proving? He’s saying “This was supposed to happen but I prevented it”

I will tell you an example

When we were kids, my Father’s colleague family was very close to us. They had a child after 10 years. My Father loves kids and this boy grew up with us. They are christians. In 2011, I had a dream like this

“Some women are sadly walking after a funeral in front of my home. They are so sad and I curiously watch them. They make a Cross sign with their palm and walk away”

I could also realize they mean to say something happened to Deepak – This boy.

The next day, I messaged this boy to take utmost care while driving. His Father immediately called up and said his son met with an accident. The bike was completely damanged but the boy jumped off and escaped. Surprisingly, the boy came to Coimbatore and requested me to take me to Saibaba temple. That was the only time he came to Sai mandir.

Did you understand how Saints work?

Sai’s heart melts for good people. My friend at office and this boy are not at all Sai devotees. They are just good people. So Sai has taken responsibility to take care of them.

Sai would have told this to me in dream just to understand the role he played in it.

It’s called “Authority of a Guru”

When a devotee goes to Baba and seeks blessings for a child, he would say

“There’s no blessing of Child in your fate but “I” will give you one”.

Here’t the word ‘I” denotes the Guru.

The Guru out of love blesses the devotee to have something in life which is not at all in his/her fate.

Now a days, I worry about people who travel in Two-Wheeler in India. They are just driving assuming that they are safe. The way some people drive Bus, heavy vehicles, SUV and Cars is very irresponsible. Sometimes, even I feel that I must be a responsible driver.

I wrote about it earlier –  You can’t always escape with your driving skills. Please use helmet

Yesterday, I took my Ma to get snacks for my Sister. We were desperately demanding extra covers from sweet shop as we have to parcel our home make snacks in branded covers and send U.S. My Mom walked into a fancy store to buy rubber band to pack. I saw this Saibaba statue near Mother Mary. This made remember the dream I had in 2008. How can I remember dreams I had years back. Call me crazy?

I see one of my Father’s colleague dressed as a fakir. It was as if he left wordily life and became a saint. He walks inside my grandparents house where some function was going on. He has a statue of Mother Mary in his palm and blessing me.

When ever I see that uncle, I used to wonder what’s the connection between him, Saibaba and Mother Mary? I could never understand until now. I felt happy to see the way the shop owner worships both Sai and Mother Mary -Arokya Matha. 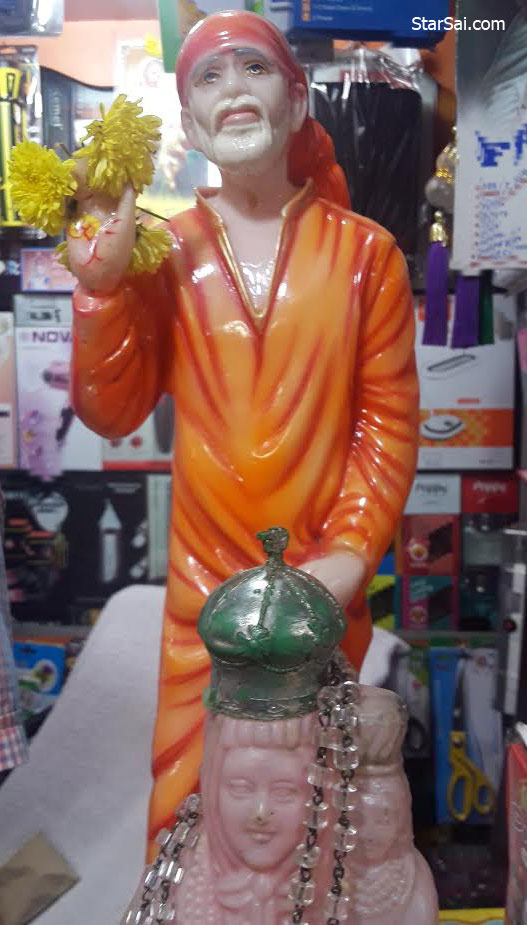 I wish that I become pure.

So pure that Saibaba himself will be surprised with me.

I am always watching an ad film repeatedly these days. Its so romantic and inspiring. Will make a Sai video based on it soon! I hope the microphone I ordered finally reaches me today so that I can keep the one I stole from work back there. Oh its not stealing. I just took it home for few days to make Sai videos..he he…