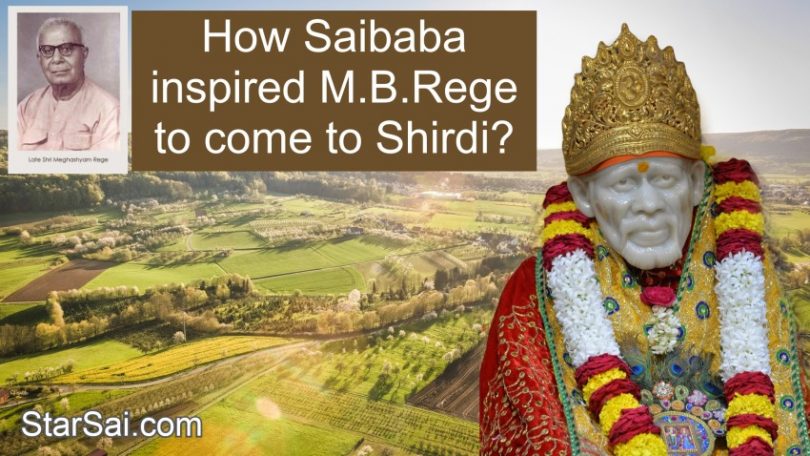 M.B.Rege was a famous Judge in Indore and used to visit Shirdi regularly. He was an ardent Sai devotee and shared many beautiful experiences with Saibaba.

During his childhood, M.B.Rege used to worship Bhadra form of Goddess Durga. Later, he was attracted to Vishnu Narayan. His favorite painting was that of Dhruv Narayan by Raja Ravi Varma.

Rege used to meditate for hours together imagining the Dhru Narayan painting. Later, the image of little boy Dhruv was distracting for him. So he cut of the Dhruv from the painting and started imagining that he should be in sitting like Dhruv and meditate remembering Lord Maha Vishnu.

Rege did not like anyone worshiping a Saint as he felt Saints are just like ordinary Men and we should only worship Gods.

Once, he had a very beautiful dream. It was 3 consecutive dreams on the same night.

In the first dream, he saw himself being separated from his own body. He saw his body on the other side and he could see his body. This dream made him realize one is not his Body. Our attachment to our body assuming that’s what we are is wrong. He realized that he should be detached from his body and its desires.

Rege was wondering who this saintly person could be. Now, Vishnu Narayana uttered the following words

“This is Sai Baba of Shirdi. He is your Man! You should surrender to him”

The dream ended there.

Again after an hour, he had the third dream. He felt that he is flying on the sky and someone is taking him to places. Finally, he lands in a village. Rege asked him “What’s the name of the village?”

The man replies ” This is Shirdi”

Rege asks “If it is Shirdi, Where is Sai Baba?”

The man replies “Yes. Saibaba is there. Go and See”

The dream continues as if Rege is walking towards Dwarakamai, gets into it and bows to the holy feet of Sai Baba. He felt blissful then.

I have spoken about this beautiful experience in the below video.