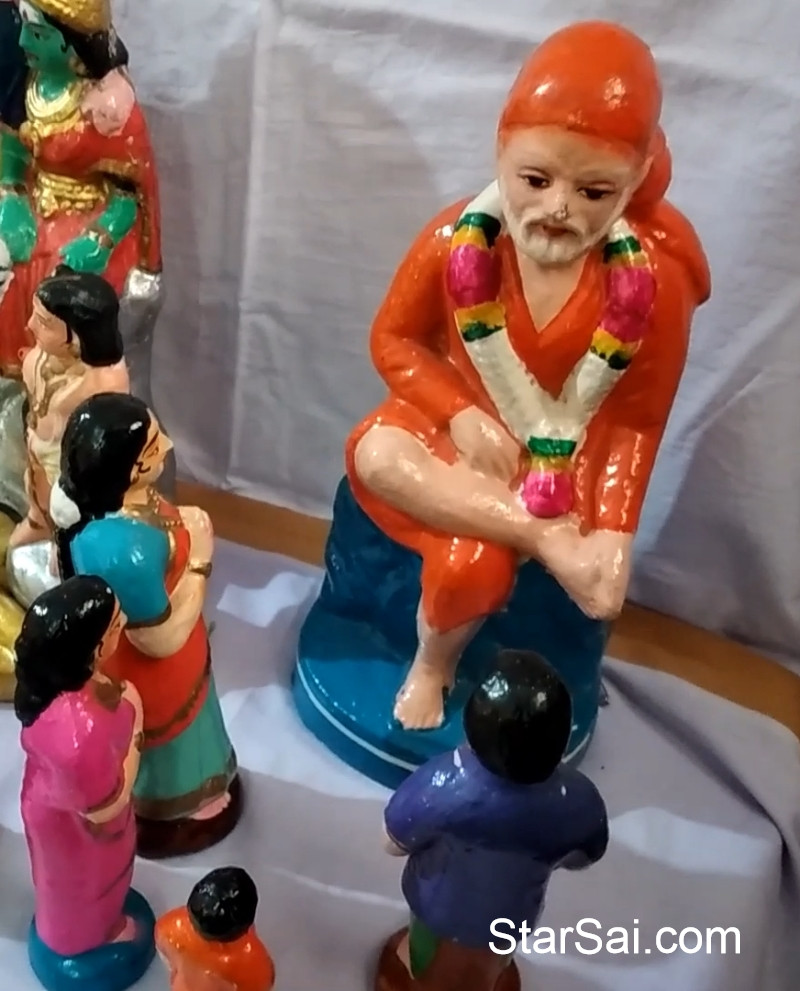 I still remember how I used to worship Goddess during the Navratri festival. I used to sit and keep remembering the Goddess intensely and pray. I remember how my sister and I used to enjoy unpacking the statues which we bought from the shop earlier in the evening. Those were beautiful days. Now, it’s more of a responsibility than a matter of joy.

When we were kids, I remember my sister and I used to make a park with sand and small dolls. Gradually, we forgot to do it. We have never decoated our Navratri Golu steps with decorative items or lights. I feel blissful to see these goddesses and did not need much decoration.

Navratri starts with shopping for small plastic and ever silver items which we give a gift for guests. Then, my Amma invites a few relatives and neighbors to home in the evening and do recite some sloka. My Amma is not good at singing though but she likes making traditional sundal and other stuff for all of us.

How Saibaba helped my Amma to fight with a women who stole her purse?

Over 20 years back, My Amma was healthy enough to travel by bus. She went to Townhall in Coimbatore and bought a Shirdi Sai Baba statue in a shop nearby. Later, she got in the bus and felt someone has stolen her purse from the bag she was carrying. It was a crowded bus and the women immediately got down the bus and tried to escape.

My Amma used to be bold and won’t let some idiot steal her purse and run away. Amma followed the women down the bus, blocked that women from running and started shouting saying I know you took my purse, give it back to me!

People started gathering around and hence the women got scared. She dropped the purse in road and said “Your purse has fallen in the road but you are blaming that I stole it”

My Amma shouted at her saying “I saw you stealing and now since people gathered, you are acting like this” haha.

Finally, my Amma got her purse.

So this Shirdi Saibaba statue saved my Amma and my Father’s hard earned money as soon as he came to us.

Moral of the story

“Hard-earned money will always be safe and secured. None can grab your wealth from you if it has come through your honesty”

As years pass on, my Mom is getting weak but I believe it’s the blessings of Mother Goddess which is blessing my Amma, Appa, and Sister’s family with good health and long life.

In the middle and top of all statues, you will see Aadhi Parasakthi. She’s the mother of all universe. I call her Goddess Lalithambigai too. When we were kids, my sister and I used to keep little kumkum inside the vessel of Aadhi parasakthi and tell all other kids that Kumkum is miraculously shedding from the Goddess.

Even today, I follow the tradition of keeping little kumkum inside the small vessel Goddess Lalithambigai holds.
Hope you like it, friends.