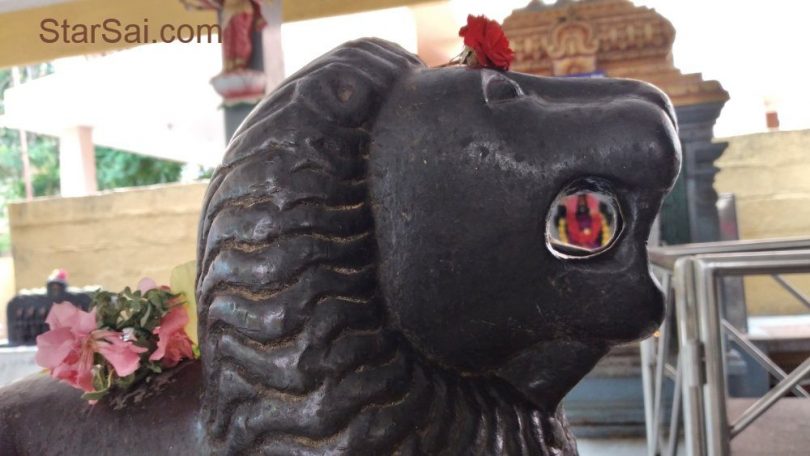 There’s a small Muthumari Amman temple in Gandhipuram, Coimbatore where I used to go regularly. It’s a small temple opposite to Sri Devi silks in Cross Cut road, Coimbatore.

My Father had told me that he used to go there regularly before few years. So whenever I get a chance, I used to go to that temple of Muthu Mari Amman.

Saw Goddess Muthimari Amman coming to our house in dream

I had this dream before 4-5 years. It was as if a tall women coming into our house with a divine smile on her face. Suddenly, I see her whole body had small bulges as if she’s affected by small pox.

It was as if, Goddess Muthumari Amman has taken the pain my parents and myself had to suffer to her own body.

After that, I feel the Goddess disappear from the room.

I woke up and realized Sai has encouraged me to show devotion on Goddess Muthumari Amman. Then, I decided to offer a Saree to the Goddess. I took Saree in Sri Devi silks and gave it to the priest and requested him to offer it to Muthu Mari Amman.

For devotees in North India, Mari Amman is a form of Goddess Parvathi. In most of the villages in Tamilnadu, Mariamman temples will be famous. Before 100-150 years, Mari Amman was worshiped to get rid of Small pox and other diseases like plague.

Have a look at Muthu Mari Amman temple in Saibaba Colony, Coimbatore. Note that there are several temples for Goddess Mariamman. The temple in the video is not the one I mentioned in the experience above. Obviously, Goddess is one in all her temples.

On July 11th 2020 morning, I had a dream as if I am doing Giri Valam in Thiruvannamalai. I felt, its the blessing of Lord Shiva in the form os Arunachalesvara and Goddess Parvathi in the form of Unnamalai Amman.

I happened to go to Saibaba colony to meet my friend. As he was making it late to come down from his house, I walked past few houses. I was surprised to see a beautiful temple of Goddess Muthu Maari Amman and immediately walked in.

I felt blissful looking at Mother Goddess and happily worshiped.

Goddess Muthu Mari Amman was wearing lemon garland. Years back, I used to offer lemon garland to Goddess and also to Shirdi Saibaba. So I felt happy looking at Goddess.

What I liked about this temple was the Trishul. It was divine and seemed to be powerful. I walked around the temple and found the priest Selvaraj. I requested him to speak few words about the temple.

He said that the temple was started playfully in 1977. Gradually, few people in the neighborhood realized that it could be constructed as a temple for Muthu Maari Amman gave shape to the temple.

Today, there are few other Gods and Goddess in the temple. Lord Murugan as Bala Murugan, Lord Shiva, Lord Dakshinamurthy and also beautiful little Ganesha along with Kannimar devi gives blissful darshan in the temple. I liked the temple priest, Selvaraj as he spoke kindly.

If there are any temples in your neighborhood about which you wanted to feature in StarSai, kindly email me.