I was very happy yesterday because someone very dear to me spoke to me over phone after many days. I wanted to hear from Saibaba temple so kept cutting call , reached temple and spoke few minutes. I probably don’t want to start getting close to anyone again and hurt myself. I had enough baba and this time also may be its not permanent. I simply felt good after many days of worries.

I learned to accept life as it comes. What ever Sai wills, let him do for me.

Many people used to ask me why you are always near Dhuni in Dwarakamai? Sometimes even I don’t have the answer. During Thursday’s when its crowded, I don’t even mind not going into the Main Hall of the Temple but I will try to step inside Dwarakamai and have a look at Dhuni. Simply Look at Dhuni – The Sacred fire of Sai. That’s enough for me.

In 2005, I used to come around the holy Dhuni of Saibaba in the Sai temple in my hometown for several hours. Every one used to think why I am doing it? I can’t say the way Saibaba made me do it to everyone.  I used to print posters of Shirdi Saibaba with assurances of Sai and give it as gift to devotees. Those days very few people come regularly to Saibaba temple.

Once a aunty thought am looking at her girl often and scolded me saying you are disturbing people who come to Dhuni.So from that day when ever any girl comes, I stop coming around dhuni and stand in the corner of Dwarakamai near  a pillar. Once in 2007, This aunty who hurt me came near Dhuni and the coconuts as usual used to burst. There was a big sound and she ran away. I laughed inside my mind and felt Baba is showing her not to hurt others and come near him.

Sai always gives me a opportunity to show they are wrong. 5 years later, when that aunty and her daughter were too sad, I gave Udi to her and she smiled.  These are small experiences that taught me never to hate people who hurt us.

I love this exact place even this day. No matter what anyone says, how much am insulted, I loved Dhuni and Dwarakamai. 2005 is such a golden year for me in Sai devotion.

It was Ram Navami 2005. The watchman hurt me saying someone has given a complaint on me and asked me not to come around Dhuni anymore. The next day, I gave a lamp to the watchman and said, I am doing it for everyone’s welfare praying Goddess of Nature. Just because you stopped it, I don’t want the sin to fall on you. One of the watchman had lit the lamp in his house and from that day quit smoking which he was trying to do for many years. Another watchman apologized to me and said, you can be in Dwarakamai as you wish and come around Dhuni. 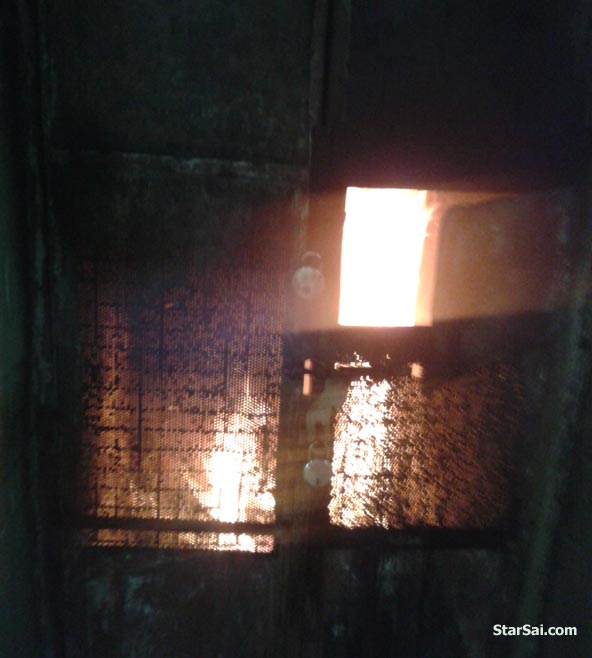 Hinduism and various religion considers fire as a form of God. Of all the 5 elements of Nature, Fire is the only element, which goes up against Earth’s gravity. Offering any thing sacred to Fire reaches the Gods directly.

These days, People who think themselves as intellectuals are creating a issue about Dhuni in Shirdi Sai Baba Temples. I agree, the smoke from Dhuni might be high at times and if your house is near by, You might have to face some hurdles. Little bit of adjustments both from Temple staff and the neighbors is necessary. At the same time, Kindly be generous in helping the Dhuni to glow forever. You too earn a punya for your kindness in accepting the presence of Dhuni near your house or other commercial places.

When Saibaba lived, he used to love Dhuni so much. Once there was a plague in Shirdi and the village people had a rule that no cart must be allowed to enter the village. A cart full of wooden logs came into Shirdi and it was blocked. Sai baba went to the cart and made it come into the Village. Sai wants woods for his holy Dhuni and he knows it won’t bring plauge.

Many people think Sai collected Dakshina from the very beginning of his stay in Shirdi. Initially Saibaba was simply collecting Match sticks which were put off after lighting lamps etc. These match sticks, Sai used to drop inside his holy fire.

The Power of Dhuni – Sacred fire of Sai

Dhuni is so powerful. Any place where you do good offering becomes powerful. Devotees offer coconuts and sticks thinking their wishes gets fulfilled when they do such offerings in Dhuni. Honestly, it also has another meaning. What ever you offer is like your “Life ahead”.

You are telling saibaba

“I don’t know whats going to happen in my life ahead. So I am offering the my thoughts, deeds and desires in your holy dhuni. You accept my devotion and bless me with what’s good for me”

I have spent many days digging the Dhuni with iron rods so that the ashes will get into the tank below. Then I used to get into the Dhuni tank and wipe it. After few days , we friends used to filter the holy Ashes and give sacks full of Udi for the Temple to use to distribute to devotees. When ever the skin in my palm used to tear due to heat, I consider it as Gift of Sai.

Udi has healed millions of Sai devotees and blessed them with good life, peace and prosperity. So lets always try to make sure we do all we can for the holy Dhuni to be active with divine fire for ever.

Every Sai devotee must take care of Dhuni in his/her own way. At times, I see devotees bringing so many coconuts, offerings and dropping it immediately. Please see Dhuni as your Child. How can Sai bear so much offerings simultaneously? Offer little and keep the rest near by Dhuni for Temple staff or other people who do service to offer it when the fire has reduced.

Its not necessary that Dhuni must always have huge fire in it. Even if has little smoke, that will do.

The first ever Shirdi sai temple – THE TEMPLE AT BHIVPURI , Maharastra

I started writing this article as I remembered the incident during Saibaba’s life time. It was one of the first article to be contributed in StarSai.com

A devotee Pradhan requests saibaba to come to his house. Sai gives him a gift of Sai’s portrait and asks him to keep it in a Temple near his house where Sai will be present as he is in Shirdi. Pradhan builds Saibaba’s mandir and lives happily. Again when he visits shirdi, Sai asks, who asked you to come here when I am there.

Then they constructed dhuni and felt happy about it..

Read the article in below link

The first ever Shirdi sai temple – THE TEMPLE AT BHIVPURI , Maharastra

OK why this article.

I learnt that they are constructing a Hospital near Saibaba temple and asked them to reduce the smoke emerging from Dhuni. I honestly feel its too much because the Hospital is really a bit far from where the Dhuni is present. I feel painful that my sweet Dhuni of Sai might be moved to another place.

I was making fun at work imagining what if all IT companies becomes like Railway station. Who will be TTR, Who will be selling Paper and who gives railway tickets and who’s the engine driver. I told them , I will be selling milk in Avin Booth and one person who always speaks loud will be Siren ! he he….

No matter how spiritual I get, I feel I won’t change being silly and when my friends ask why you are like this, I say, we have to use all creativity to make people smile.

Bringing smile is all that matters !

Baba, make all your devotees smile by keeping the holy Dhuni Alive. I love my sweet little Dhuni. It means a lot for me Sai.